Have you ever wondered what goes on at Cuboree?

Mitchell went last year and has written a great report of the activities and GR8 fun that was had!

The next Victorian Cuboree is in September 2017 – should be worth waiting for.

We arrived at Allard Park at 9:45am (the bus was due to arrive at 10:00am – but it was 45 minutes late) all really excited about Cuboree GR8. The bus trip seemed really long as we had been waiting a long time for the bus and been planning to go on Cuboree for ages. When we arrived, we carried our bags, filled with all our stuff, over 100 metres up a big slope. I was in pack 120 in sub camp 1. Our campsite had been set up a few days earlier with our sleeping tents, eating area, camp kitchen, and supply tent all set in a bush area. We unpacked our stuff into our tents and then found out what sixes we were in. Pack 120 had a Frog, Octopus, Dog, Rosella, Fish and Cat 6. I was seconder in Frog six, and we all had frog hats to wear, so we could be easily spotted. We started to explore Gillwell Park. We passed Cherry Lane and played a few Carnival Games. We also swapped a few badges. After dinner, we went to the Opening Ceremony. We had one of the far seats but the show was spectacular. There were lights, fireworks, which just look like fire, and a singing group called Cub Direction which most of the cubs did not like the sound of. Then we went to bed, ready for the next day’s GR8 adventures. 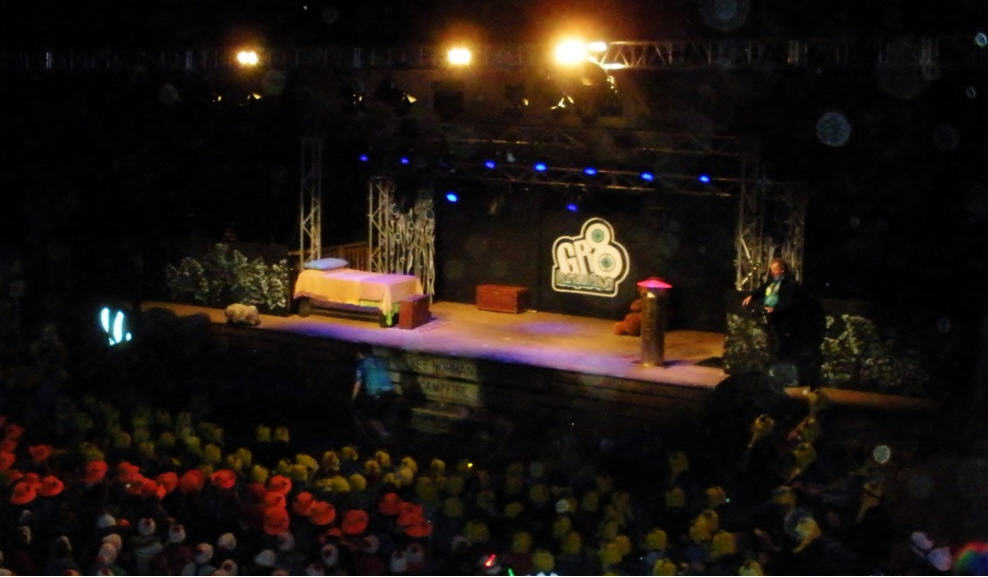 We woke up in the morning ready for a GR8 day. We were doing GR8 Australia and Robin` Da Hood. Before we headed off we met at the mainstage for the morning show (we did this every morning). It was like a Cuboree news show for cubs with everything we needed to know for the day. We were told what the weather was going to be using the ‘magic Cuboree weather rock’. We headed off to our bus to go on ‘Puffing Billy’ – it was being pulled with a diesel engine! We waited for the bus for 1½ hours, for a short fifteen-minute bus trip. We then had to wait again for the diesel engine to arrive, so we had time to play heaps of fun activities. The first one was a bouncy castle obstacle course. We had to jump over a bench, through a hole, dodge past 3 poles, touch the wall before coming back so the next person could go. Our next activity was tug of war. We won one and lost one. Then we did another obstacle course. First, we had to go into a circle shaped area, go into a rectangular shaped run, go under a tight space then you had completed the obstacle course. We all got a bit muddy on that activity. Our last activity before lunch was Whack a Cub! The Leaders had big inflated whacking sticks, and the leaders could whack the cubs with the sticks. However, the cubs could steal the sticks and then whack the leaders but the leaders could steal the sticks back. Then it was time for sandwich lunch. 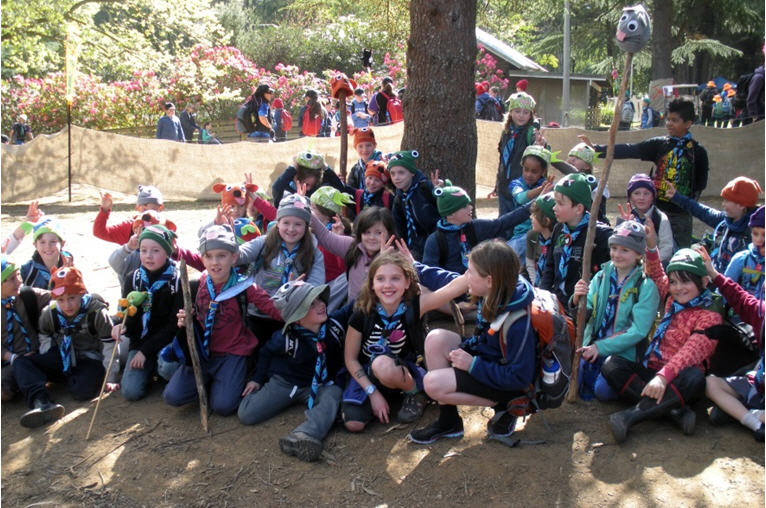 After lunch we went on coughing billy (HA HA HA,) the diesel. I sat on the railing and dangled my feet over the edge. Sometimes my foot hit a leaf or branch off the trees as we passed by. After we got off the train we didn’t have to wait this time for the bus. We headed back to Gilwell for Robin` Da Hood. We were trained to be merry women and men. We did archery, swinging by ropes and making shields. We needed to defeat the evil sheriff with our weapons (soft balls.) We had to throw them at the evil sheriff, who apparently smelt like fish. When we defeated the evil sheriff we went back to camp. We had afternoon tea, warm Ribena or Hot Milo (it was very windy and rainy after that.) We stayed at camp and played card games until tea time. After tea we stayed at camp and sang campfire songs (with no campfire!) because it was too wet to go to the main stage for a campfire and entertainment. The entertainment team came to us instead. We all went to bed and had a good sleep. 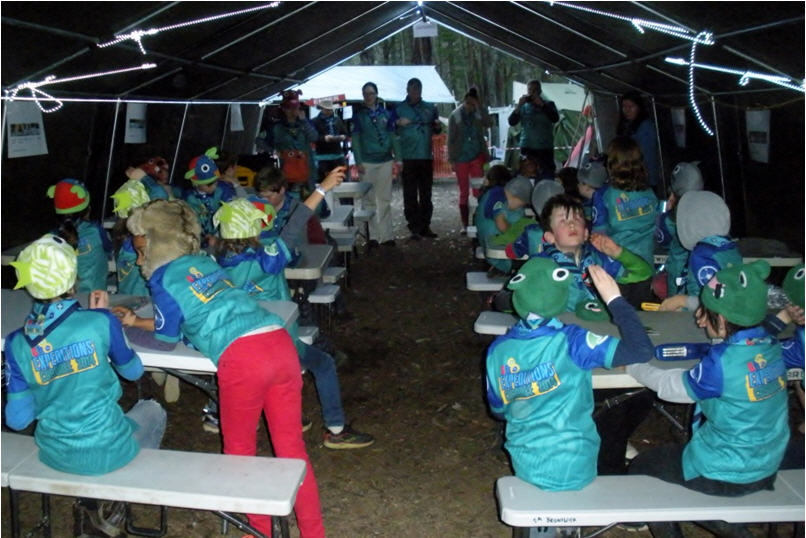 Today was getting wet and muddy day! Everyone was excited.  At Never Never Land, our first activity was to slide down a ginormous hill with a helmet on, sitting on a plastic seat, which made it easier to slide.  Other cubs were allowed to launch teddies at us while we were sliding down. Well, we are in Never Never Land. After that, we had a pillow fight with large sponges. Because it had been raining, the ground got muddy so the sponges got muddy. This was not meant to be a mud activity but turned out to be very muddy.  We then watched a play put on by the Venturers, about Peter Pan and Captain Hook, before heading back to camp for lunch.

In the afternoon, we went to Far Far Away, where we did many activities based around the Shrek movie theme. The first was three little pigs, where we were put into three pigpens with two people in each, and we had an inflated hoop. We had to try to knock each other out of the pen. After that, we went through the gingerbread house, where we were sprayed with water, bombed with flour, and finally had sprinkles put on top. The next activity was making gross noises with a balloon (like smelly Shrek), then trying to guess what was in some boxes by feeling yucky things like mud and slime.  We then headed to the Palace, and did many different games with water and nerf guns. The last part was fun where we went into the dungeon, ended up at the courtyard below the dragon, and got to throw muddy sponges at people’s heads. It was fun to get the leaders covered in mud!

Wednesday night we had a combined campfire and disco at the main stage, with lots of people turning up with glow sticks. We learned some new campfire songs, like Boom Chicka Boom, and sang some old ones like My Highland Goat. 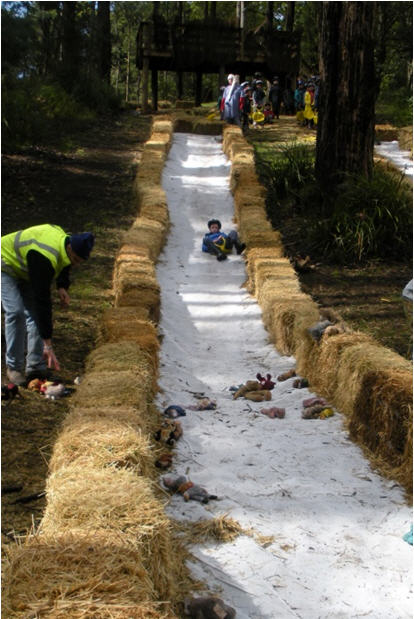 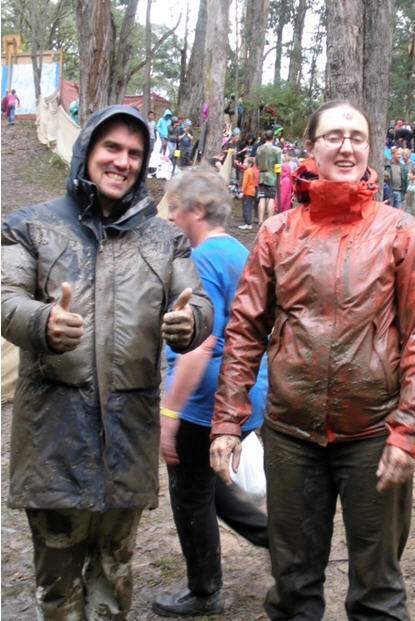 Thursday was our last day of activities, where we got to do To Scouts and Beyond, then Time Lords in the afternoon. We did lots of scouting activities like go karts (on rope pulleys), geocaching, life size puzzles, and making cars. Time Lords in the afternoon was based on a Dr Who theme, where we did a lot of simple experiments, saw a few plays, shot balls from a crossbow at darlecs, searched for artefacts in a sandpit, and went blindfolded through a scary maze.

Thursday night was the closing ceremony at the arena, where we sang the cuboree song many times, and lots of speeches. We saw Cub Direction for the last time (hooray) then went back to camp for a yummy supper. 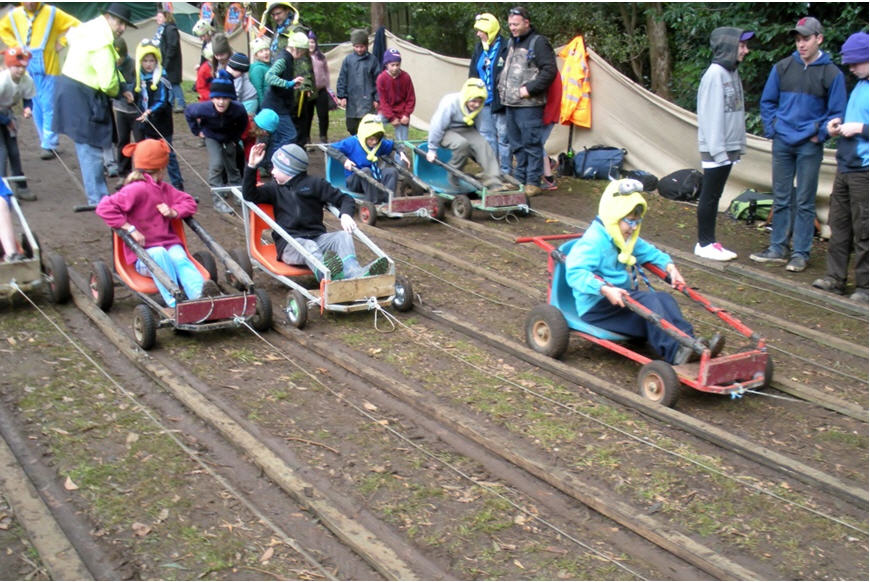 Friday was pack up day and home on the bus. We had to pack up our bags after breakfast, and then help to clean up the whole camping area. We had to leave the tents empty to dry from the rain. We lugged all our bags down the hill to wait for the bus (another hour waiting) then boarded the bus for home. We got back to Allard Park at lunchtime, where our parents were waiting to pick us up. 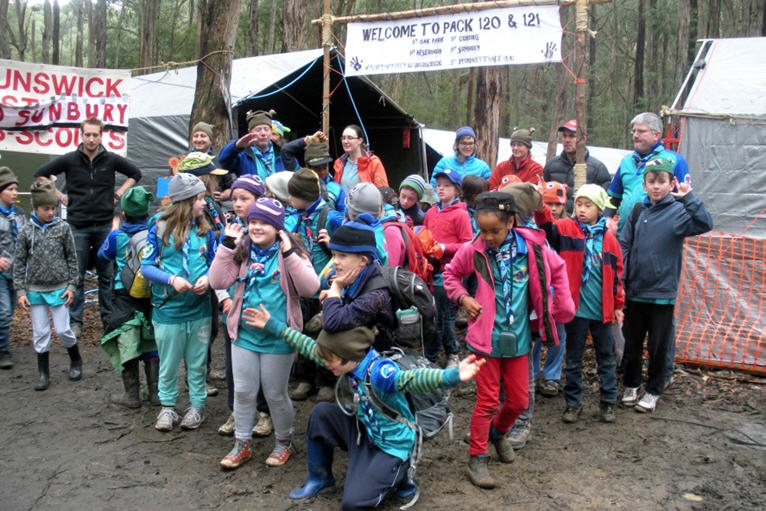